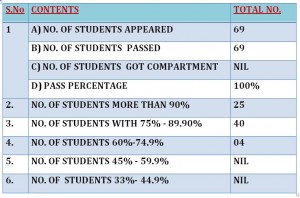 Regional Level Science Exhibition by CBSE was held at Global Indian International School, Chinchwad, Pune. One exhibit (Aqua Filter) from our school has been selected for National Level to be held at Delhi.

The overall performance of the players was remarkable and out of 17 students,  6 students achieved medals.